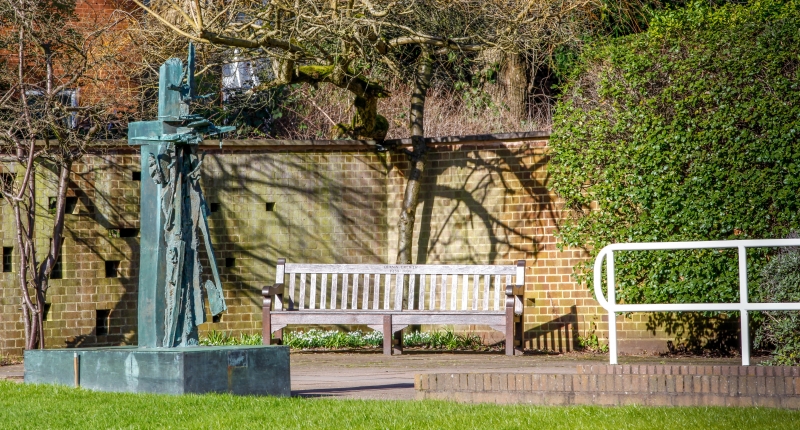 The cross which stands on a plinth in the North-West edge of the Chapel Lawn was sculpted by Ray Arnatt. It was funded by grants from the Arts Council and the then College Council and erected in 1958, at the same time as the new Dining Room and Principal's Lodgings (now the administrative offices) which took the place of the former ‘Old Building’ – a large Victorian villa which had previously been the residence of the Bishops of Birmingham and which the College occupied after vacating the original premises in Paradise Street.

Arthur Gribble (Principal, 1953-67), who initiated the commissioning of the cross, later wrote about the process:

I thought that we needed a Christian symbol at some focal point in the college; preferably one that would be seen from the road way, and that it should not be mawkish. And I felt strongly that in this new building programme we should follow the precedent of the building of the chapel (with its west front sculpture) and make some contribution to modern art.

I knew that we could not afford Henry Moore, but it happened that I knew Walter Hussey [Dean of Chichester and a famous patron of modern art] and greatly appreciated his collection at Chichester Deanery. So I took our architect to lunch with him at Chichester and asked his advice. Very kindly he rang up Henry Moore and, following his suggestions, we eventually arrived at Ray 4rnott by way of one of the London Professors of Art....

Originally it was known as 'a simple-complex cross, which, perhaps, is somewhat prosaic. The talks which led to its construction had in mind the desire to draw attention to the different ways in which the- cross can be regarded....

The sculptor, Ray Arnatt, wrote as follows about the cross:

I have made a cross. What do I think of Christ? From the event of his life, his ideas, saying and actions, separately and as a totality.., to innumerable inferences and interpretations. ...Yet examination only reveals aspects, and they do not add up to the totality. And the meaning of that totality remains a mystery. I am always left in awe of that mystery, and often in disgust of the institutions that history has built upon it. The mystery of Christ can only be revealed by another mystery.. ....The real understanding is recognition of mystery. Art is not imitation or an illustration of an idea. It is a metaphor. As long' as life itself remains a mystery, then art will run as a parallel mystery to it.

Christ is the one figure in history who has fully realised our human situation. That situation can only be described as a paradox. He preached paradox in the Beatitudes, and his Resurrection was the paradoxical result of his violent death. Paradox is the conditions between extremes, and extremes are the province of the artist. ...Here the connection between the form of the sculpture and its content.