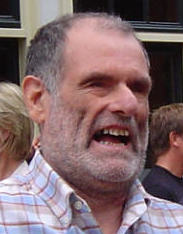 The lecture was given at All Saints Kings Heath, where John was actively involved for many years